Objectives should be qualitative and describe the desired outcome. For example, look at the goal: understand customer needs. There is no need to have numeric metrics for objectives (you’ll have those with key results).

You can see a lot of examples of different OKRs for different teams at http://okrexamples.co/

Objectives and Key Results (OKRs) is a simple process of setting company, department, team, and personal goals and connecting each goal with 3-5 measurable results.

As you achieve those results, the whole objective feeds into overall completion. It’s all about focus, so only any level you should limit yourself to 3-4 objectives, not more.

There’s a bunch of great examples of OKRs at okrexamples.co.

Moonshot OKRs or stretch goals are goals that seem impossible to achieve. They should force teams and individuals to rethink how they work and take you out of your comfort zone. They should make everyone involved wonder, how far you can go.

Committed OKRs (roofshot OKRs) are ones that your organization or team has agreed to execute and might have a clear action plan for achieving. Aspirationational OKRs (moonshot OKRs) are more visionary and likely won’t get completed 100%, but they are important for moving towards the future.

Moonshot OKRs are the lofty and ambitious Objectives where 100%  completion is likely impossible. Objectives should be set with very high bars. Achieving these OKRs brings huge success, but the risk of failing is high as well.

For both the roofshot and the moonshot OKRs what you measure with the Key Results can be the same. But how big the stretch is will define which type of goal it is.

With moonshots, 66-70%  progress achievement can be called a success. But you have to be careful. While these goals should be just out of reach, it’s important that people would still take them seriously. Employees need to do everything to achieve them. If 66% becomes the new 100% for everyone, nobody will push hard enough.

In general you should have 1 – 5 Objectives that each have 3 – 5 Key Results. But this is not set in stone.

You just have to keep in mind, that more objectives means less focus. 3 Objectives with 3 KRs have 9 KRs to follow, 5 Objectives with 5 KRs is 25 and that’s not realistically doable in a quarter.

To get the best results OKRs should be aligned to one another. Each part of your company must know what’s going on and how each part contributes to the whole. Our belief is that in order to get all the employees in your company working as one, they all should share an aligned, hierarchical tree of objectives and key results. 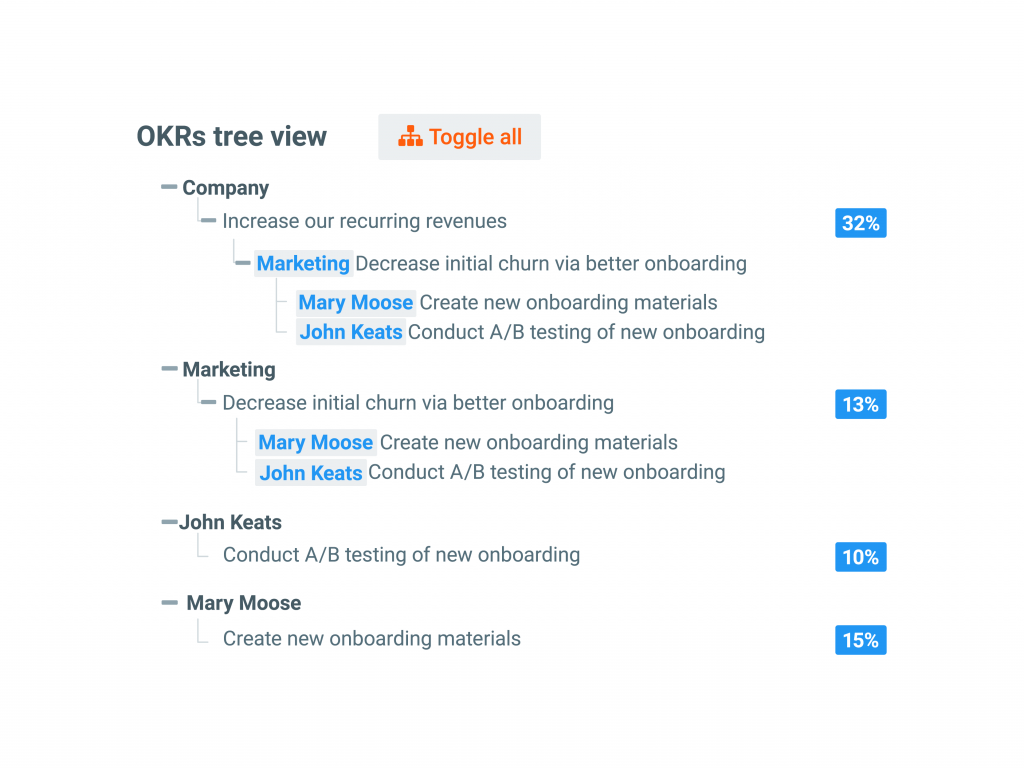 The easiest way to get started with OKRs is to start using them.

There are a lot of resources you can read and watch before, but to understand how they work, they need to be tested on your team.

It is very common to finish your first quarter with mostly 100% or with mostly zeros, especially if you had no prior experience in setting OKRs. It’s important to remember that OKRs are not a project you run for 3 months. To work well, they must be used constantly and the progress must be improved every quarter. In 3 or 4 quarters, you should have a clear idea on how they work and most of your KRs should fall into the 70% category. Then you’re all set.

Key results measure how far from reaching your objective you are. It adds metrics to objectives. The easiest way to set Key Results is to follow the SMART model. 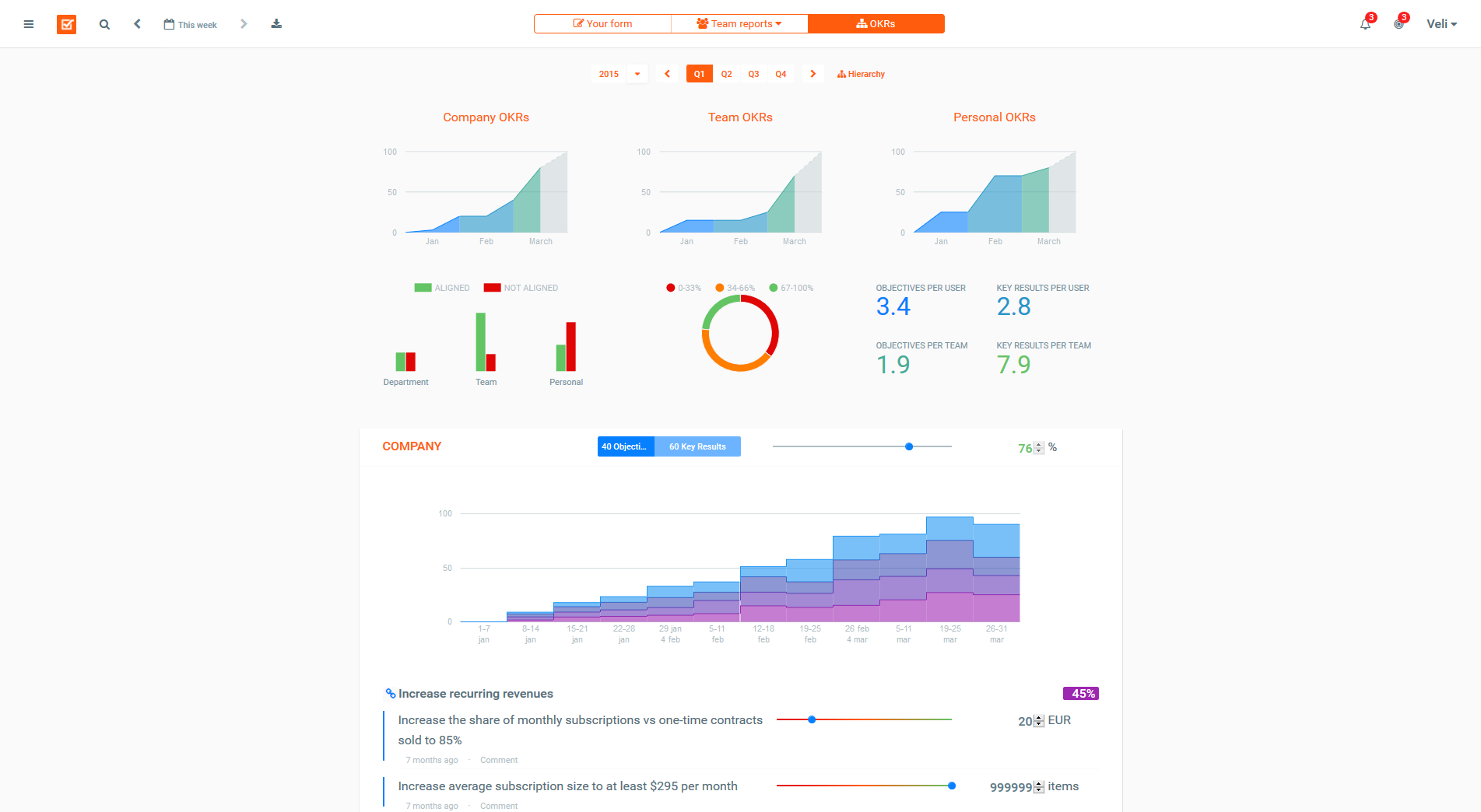 SMART is a methodology that sets criteria to the tasks you set. The KRs must be Specific, Measurable, Achievable, Relevant, and Time-bound. The questions you need to ask for each goal are:

Objectives and Key Results work because they solve the main problem with goal setting: ambiguity.

When you use OKRs, everyone understand what they have to do, what others have to do, and how everyone’s individual tasks help them move forward as a team.

According to the “Step by Step Guide to OKRs”, The history of OKR methodology started its climb to popularity when John Doerr introduced OKRs at Google in 1999. But actually, OKR methodology had been championed even earlier by Andy Grove, the late CEO of Intel during the 1970s.

Doerr has said: “I remember being intrigued with the idea of having a beacon or north star every quarter, which helped set my priorities. It was also incredibly powerful for me to see Andy’s OKRs, my manager’s OKRs, and the OKRs for my peers. I was quickly able to tie my work directly to the company’s goals. I kept my OKRs pinned up in my office and I wrote new OKRs every quarter, and the system has stayed with me ever since.”

The beggining of history of OKRs.

The birth of OKRs can be traced back to Peter Drucker. He was one of the first managerial thinkers. And in the 1950s he introduced a system called “Management by Objectives” (MBOs). That system called for setting objectives for everyone who works in a company. These goals had to “lay out what contributions a given individual and their unit are expected to make to help other units obtain their objectives.”

Andy Grove, CEO of Intel, reshaped the MBO system into a simpler form that answers the questions:

He also suggested objectives should be set more frequently, on a quarterly or monthly basis. Arguing that as the fast-paced world requires constant feedback. He also believed multiple performance management tools should be used in conjunction with OKRs. Finally, he believed OKRs should be stretch goals and achieving them 100 percent should be next to impossible.

Having gotten a lot of leadership lessons from Grove, John Doerr introduced the system to Larry Page and Sergey Brin, co-founders of Google.

Objectives and Key Results (OKR or OKRs) is a framework for defining, sharing and tracking objectives and their outcomes. It has been used by several major companies, including Google, LinkedIn, Twitter, Uber and Zynga.

More thorough introduction to OKRs can be found here.

No. OKRs can be implemented in a company of any size. The core principles of the methodology (Objectives with measurable Key Results) can be scaled for one person or for huge companies.

Is an answer missing from Introduction to OKRs?

Ask our OKR experts any question about Introduction to OKRs.

Any cookies that may not be particularly necessary for the website to function and is used specifically to collect user personal data via analytics, ads, other embedded contents are termed as non-necessary cookies. It is mandatory to procure user consent prior to running these cookies on your website.

Transition from other goal-setting methods

× — No thanks, my team has perfect productivity.